Laminitis Rehab - All Brands on Deck

by Karen Cox March 15, 2022
A client's beautiful Missouri Fox Trotter was diagnosed with Equine Metabolic Syndrome, similar to diabetes in humans, and has been laminitic. The client had already put Scoot Boots on front but the horse is extremely sore so we talked about adding pads and getting the backs booted up too. I brought along a giant bag of boots, two  3/4" thick neoprene blocks for the horse to stand on while boots were off, a bunch of different sole pads, several sizes of Scoot Boots and some Recovery boots made by Equine Fusion.

When I arrived, the horse was standing with her front legs sticking out in front of her. I didn't get a photo of that but she looked a lot like this photo from the Okanagan School of Natural Hoofcare website (www.oksnhc.com): 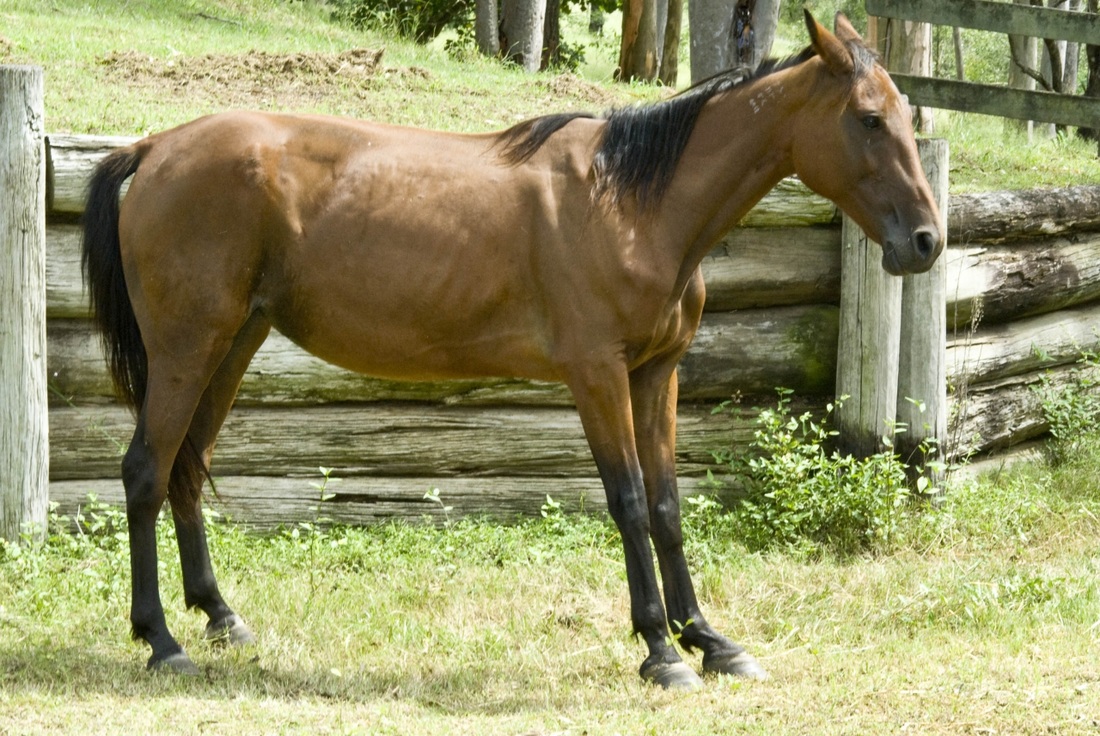 She had size Reg 2 Scoot Boots (Brand # 1 in our story) on front, but with no pads I could tell she was still very sore. Her owner said she was a lot better in the boots, but still, she could barely hobble around her stall and had been laying down a lot. Scoots have the perfect amount of protection from concussion for a horse that is riding on rocks , but a severely laminitic horse really needs rehab boots because you can add thick cushy pads. So we decided to put Equine Fusion Recovery Boots (brand # 2 to the rescue) with thick pads on the front and move the Scoot Boots to the back feet. 
When we removed the Scoot Boots we stood the horse's front feet on the two neoprene blocks so that she would have some padding to stand on while I picked up one foot to put the Recovery Boot on the other foot. I didn't catch it all on video but she was rocking side to side shifting her weight and seemed to be either testing the feel of the blocks or relieving pain by alternating weight from one foot to another.

The the neoprene, being 3/4" of cushiness seemed to help her, and I didn't have any thick boot pads on me so decided to cut the blocks into pads for the front feet.
The back feet weren't as sore so we just added the regular Scoot pads that are 3mm thick. They were just the ticket for both comfort and for snugging the boots up a bit on the smaller back feet. While the DIY pads made of neoprene worked well at first, within 3 days they squashed completely flat and useless. My client went to the local tack store and all they had were (welcome Brand #3) these EasyCare wedge pads. The round part of the pad is the back but they fit better in the Recovery boots backwards. They were too thick, a little too long, and we didn't want a wedge. So I took the pad home and McGyver (I mean my husband) ran them through the bandsaw so they are all one thickness and fit nicely into the toe of the boot.

If you look closely you can see where the pad was cut horizontally with the bandsaw and also where I cut the heels a little narrower and shorter with scissors. The pads are now the same uniform thickness and fit much better into the boots. They should last longer than our makeshift pads!

As a side note the owner is proactively treating the horse for thrush as there can be an added risk of that being booted 24/7, especially with rehab boots that are a less breatheable, and cushy pads that are constantly against the sole. But it's a good trade-off for the amount of comfort that is offered.

The vet was scheduled for a follow-up visit on the fourth day after the boot fitting so I decided to come along and hear what he had to say. The client had told me the vet was not sounding very optimistic at the initial visit. The purpose of this follow-up visit was to take radiographs. She isn't exhibiting much pain on back feet so radiographs were only done on front. The radiographs revealed that while the horse has considerable pain, she only has slight coffin-bone rotation, and has 8mm sole thickness at the toe, which isn't bad. The vet was really expecting worse so this was good news. He said some horses will have terrible x-rays and not exhibit much pain, while others can have pretty good x-rays and seem worse. This horse sort of illustrated that concept because she seems more sore on the right front (if we pick up the left foot she almost buckles even if standing on a pad on the left), but the x-ray was worse on the left! This horse is normally shod, and has shoes pulled for winter so was barefoot when this happened, but the tentative plan is to put the horse back in shoes

in about a month if things are going OK and she doesn't still need to be walking on "pillows". I have my own thoughts on that and you can probably guess what they are. But I don't like to contradict a vet's advice so I didn't say anything. OK, I didn't say MUCH

If the horse goes back in shoes and is not doing well I will chime in then. But for now we are just going to try and keep her comfy and hopefully she shows improvement over the next month. I did mention to the owner that it would be good to make sure the farrier does something to support the center of the hoof to keep the coffin bone from sinking further if only the perimeter of the hoof is supported. I am hoping to be there for the farrier visit.

We don't know what the future holds for this horse but the vet was at least more optimistic at the most recent visit. It's a difficult road ahead no matter what. TheShe will also need medications and a no-sugar, no-grass soaked-hay diet indefinitely.
This recent article posted by Dr. Kellon, shatters the idea that this issue is caused by sugar. Rather some horses are pre-disposed to EMS. But similar to human diabetes, once diagnosed, sugar is a big no
https://drkhorsesense.wordpress.com/.../sugar-does-not.../

These are the boot-related products being used for this rehab: